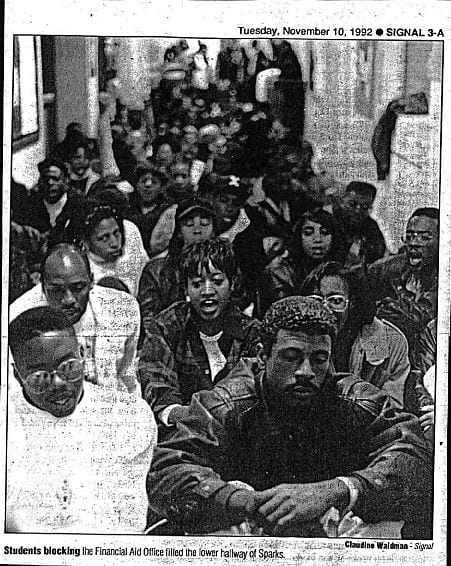 Through the efforts, persistence, courage, and commitment of student activists who sought to bring social change to Georgia State University, the Department of Africana Studies was created. It was in November of 1992, when a racial slur “n****rs enter here” scrawled on a trash can was discovered near offices of a white fraternity that was pledging a black member. The incident sparked black students’ demand for change. According to reports, this was not the first of racial or homophobic harassment that had been ignored by administrators. However, black students who staged the sit-in saw an urgency and a need for change. During two days of sit-in demonstrations to protest the climate of racial tensions on the campus and to lobby for an African American Studies Department, as it was then called, newly-appointed President Carl Patton moved swiftly to resolve the issues.

As a direct result of these demands in 1994, The Department of African American Studies at Georgia State University became a reality. Dr. Charles E. Jones accepted the appointment of the founding chair and created a department dedicated to fulfilling the university’s advisory committee’s mandates to become a regionally and ultimately nationally recognized department. Under Dr. Jones’ leadership, the department became a model of interdepartmental collaboration and community relationships. The department started a Bachelor's of Arts (B.A.) degree program in 1998 and a Master's of Arts program in 2008. Hundreds of AAS majors have achieved B.A. degrees. Over a third of the alumni of the undergraduate program have achieved graduate degrees in Africana Studies, Education, Public Health, Law, Social Work and other Social Sciences and Humanities. Several of the alumni are professionals in academia, public health, education, community and social justice advocacy, and social work. In 2011, Georgia State alumna Kimberly Hixson created the first AAS scholarship, the Lucille Adams Scholarship in African American Studies. This fund provides an undergraduate scholarship award for a rising senior who is majoring in African American Studies.

In 2021, the the department was renamed as the Department of Africana Studies, reflecting a global approach to teaching and research in the department, as well as national trends in academia. The new name reflects a broader embrace of studies and research pertaining to people of African descent in Africa, the United States and throughout the global diaspora.

Due to the COVID-19 pandemic, the Department of Africana Studies has changed its normal operations temporarily in accordance with our University guidelines. Thank you for your understanding and we look forward to continuing to meet the needs of our students, University community and our local, regional, national and global communities.

If you have questions regarding our graduate program or graduate courses, please email:
Dr. Lakeyta Bonnette-Bailey