Jonathan Gayles, Ph.D. is Professor and Chair of African-American Studies at Georgia State University. He is a graduate of Morehouse College (B.A., Psychology), Winthrop University (M.S., School Psychology) and the University of South Florida (Ph.D., applied anthropology). His primary areas of interest include the anthropology of education, Black masculinity, and critical media studies. In 2012, he produced the award-winning documentary on African-American comic book superheroes entitled “White Scripts and Black Supermen: Black Masculinities in Comic Books ”(California Newsreel). In 2013, the American Culture Association/Popular Culture Association awarded the documentary the Peter Rollins Best Documentary Film Award. He also produced “The E-Word: A Documentary on the Ebonics Debate.” The film examines the context of the national furor in response to the Oakland Unified School District’s Resolution on Ebonics. The film pursues a more informed understanding of “The E-Word” through the use of archival footage and interviews with former students, teachers, administrators, policy-makers and scholars that were directly involved with the Resolution and the national debate that ensued. During his tenure at Georgia State University he served as the inaugural Associate Dean for Undergraduate Learning in the College of Arts and Sciences as well as the Associate Provost for Institutional Effectiveness. As Associate Provost, he led Georgia State University’s (GSU) consolidation with the former Georgia Perimeter College (GPC). This is the largest consolidation in the history of the Southern Association of Colleges and Schools. He currently serves as Chair of the University Task Force for Racial Equality. 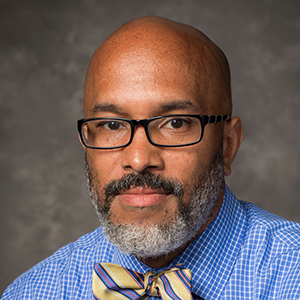